A dedicated team of experienced educators

We are committed to continuous learning for our staff

The Farmhouse Montessori School is incredibly proud of its dedicated and experienced teaching staff. Our teachers are not only committed to providing the best environment for your children but are also involved in various Montessori and early childhood organisations. They support Montessori schools and centres throughout the world, as well as workshops and institutions of early childhood.

Each Director/ess has a teaching degree as well as Montessori post graduate training. Other educators have or are training for a Child Care Certificate, Diploma or further. All staff work closely together to ensure children and young people are provided with the highest standards of Montessori education. On our primary campus, we have made a commitment to higher staff-child ratios and have two qualified teachers in each of our primary classes.

As a school, we have an ethos of supporting the sustainability of authentic Montessori teaching. All teaching staff regularly participate in workshops and training to continue to upgrade their understanding of child development and best Montessori practises. We are also currently funding the next generation of Montessori teachers to complete their Montessori training in both pre-primary and primary.

The executive team at Farmhouse Montessori School is composed of employees who play a strategic role in the running of the school. From the accounts department to curriculum implementation, executive staff are required to attend regular meetings where important structural and procedural decisions are made. These meetings allow the team to speak for the staff who work alongside them, thus making recommendations for the whole school. The executive team represents the entire staff as we move forward with initiatives and developments to improve the running and efficiency of the school. Sabine is the Farmhouse Montessori School Principal and has joined the school at the beginning of 2022.

Sabine has begun her teaching career in 1987 and has worked in a range of educational settings across different countries and continents over time. Since arriving in Australia in 2011, she has worked in educational leadership in NSW and Victoria focussing on Montessori excellence in schools and the expansion of Montessori pedagogy in the education sector in general. A highly dedicated and passionate Montessorian and educationalist, Sabine has worked with children in early childhood, primary and adolescence and is a strong advocate of Montessori education for children and young people. Sabine`s work continues to be inspired by her work with likeminded educators and by her passion to enable as many children as possible to enjoy the gift of Montessori education. She is also an active member of various Montessori networks and connects with Montessorians across the globe.

Sabine has a Bachelor of Teaching from Austria, holds a Master of Art (Music Pedagogy) from the University of Vienna, Austria, and an AMI Graduate Diploma in Montessori Education which she obtained in the United Kingdom.

A Montessori mum herself, Sabine has two children who have attended Montessori schools during their own schooling. Jenny has worked in early childhood within a number of Montessori and mainstream schools since 1986. She started her teaching career at Forestville Montessori School as an assistant in the 3-6 class. Jenny holds an Associate Diploma in Social Sciences (Early Childhood), a Diploma in Montessori Education through MWEI, a Bachelor of Teaching through the University of New England and a Graduate Diploma in Education (Montessori). She opened the new early childhood centre for SCECGS Redlands on their North Harbour campus, which was a Montessori school at the time.

Jenny joined Farmhouse Montessori in 2012 and was appointed to Head of School in 2015. During her time as Head, she led a dedicated team of educators to build a sustainable, financially secure future for the school.  In 2018, Jenny stepped down from this position to return to her passion – teaching a 3-6 classroom as Coordinator of the early childhood campus at North Balgowlah. Jenny is a Northern Beaches local, married with one daughter, and two granddaughters who now both attend the Farmhouse Montessori School.

Corinne is a Northern Beaches local who has always had an interest in the education of children. While still at school, Corinne worked in after school care and as a swimming coach. After completing her HSC, Corinne traveled to America to take part in their Summer Camp program where she spent six months working as a camp counselor with 6-8 year olds. It was during that time Corinne realised she wanted to work in the education of young children.

Corinne has been with Farmhouse Montessori for the past seven years, beginning as an outdoor educator in the Infant Community before being offered the position of leading the infant classroom. Corinne is passionate about early childhood education and how crucial those first few years are for the child. Corinne is currently completing a degree in Early Childhood and is looking forward to continuing her learning in this field. Laura studied her Degree in Primary Education in Spain, where she grew up. Her passion for alternative education grew stronger after studying in Norway for a year. In Bergen, she learnt about the importance of recognising the individuality of each child, with their own unique gifts and interests. After living in England and New York, where she taught Spanish as a second language, Laura migrated to Sydney. She started working for The Farmhouse Montessori School in 2016 and since then, she has worked in the lower and upper elementary environments.

Laura completed her Diploma in 6-12 Montessori education with MWEI in 2018. She understands learning as a lifelong process and appreciates new challenges that help shape her teaching career. She believes children learn best in an environment where they have the freedom to explore and to grow feeling safe and happy.  In her free time, Laura enjoys running, drawing, reading and playing the piano, and is always happy to bring her experience into the classroom in order to learn from each other. 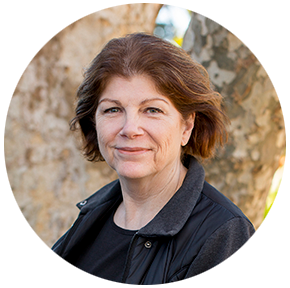 Jill is a long-standing member of the Farmhouse community, holding positions as a teaching assistant, financial administrator as well as parent. Jill joined Farmhouse Montessori in 2001 as a classroom assistant in the 3-6 class but changed positions after 12 months to do reception and accounts. In 2003 – 2004, Jill moved into the role of Financial Administrator.

Jill has worked as bookkeeper for a wide variety of clients covering lots of different industries, including working as an assistant accountant on two feature films. Prior to working as a bookkeeper, Jill owned and managed a number of restaurants and a catering business.

Jill has a daughter that attended the Farmhouse for the 3-6 program and is now doing a degree in digital design.